Fired clay with two kinds of sandstone and glaze

Fired and painted clay with glaze

Fired and painted clay with glaze

This body of work, comprised of five serial sequences— Origin of Species; Alive; The Beginning Is the End; Ghost Print and Garden of Earthy Delights— provokes reconsiderations of our assumptions about human nature. Although the animal kingdom arose from single-celledancestors through an evolutionary surge of genetic material, more than fifty percent of ourgenome, the human genome, is shared with very first animal. Many contemporary conflictsderive from distinctions we insist exist between races, between animals and humans, and between ourselves and others competing for the same resources, but the genetic pool emphasizes our relatedness, how much we have in common, blowfish and ballerinas, gila monsters and gurus.

The show introduces radical but somehow familiar forms that ask us to re-examine Western assumptions about species hierarchy. We encounter a bestiary in which traces of the human and traces of the animal linger in imagined bodies on the brink of being born.

In order to explore the deep relationship between the human and non-human, between the constructed and the inherent, I continue to expand my technical approaches to surface, shape, and composition. After firing, I cold-finish sculptures using an array of techniques including spray-painting, glass and garnet amalgamation, and sandblasting in order to build out layers, to accentuate the complex connection between the sculptures and the body in transition between recognizable incarnations. The work, begun in long-term reflections on the interdependency of species, incorporates earthy material that is fired and subjected to various post-firing processes.

The exhibition integrates my sense of our current environmental exigency, recent genetic science asserting the relatedness of earthly life, and a philosophical and ethical concern for the implications of our conjunction and commonality. 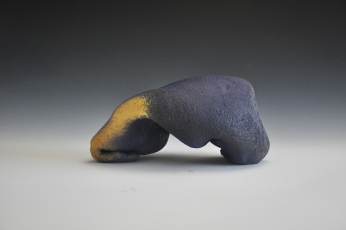