Lacoste/Keane Gallery presents Barbro Åberg: Silent Vocabulary a solo exhibition of ceramic sculpture October 13- November 3, 2018. This new body of work by the noted Scandinavian ceramist refers to an intuitive vocabulary that comes to the artist as she works. “I view my sculptures as individuals that speak a quiet, visual language of their own. In that respect, my work ends up being the result of a co-operation between me and the individual sculpture.”

White Entangledand Organic Ship are signature sculptures in which the play of light through the open form expands the art of the piece. The introduction of closed forms as in Dragon Eggand Texted Egg contrast light’s transcendence with the density of matter--the embryonic with the life that has lived.

Åberg was first introduced to the USA in From the Kilns of Denmark, the seminal international exhibition on contemporary Danish ceramics opening at the Museum of Arts and Design in 2002, then traveling to four other American museums before going to Paris and Berlin.  She was featured in Lacoste Gallery’s A View from Denmarkin 2008 and six times at SOFA NEW YORK and SOFA CHICAGO, the premier art fair for material-based art in the US.  This was followed with a two-person show at Lacoste Gallery with the Danish artist Hans Vangso. This is her first solo at Lacoste/Keane Gallery a new iteration of Lacoste Gallery.

The internationally recognized Åberg, born in Sweden, works and lives in Denmark talks of having a clear artistic vision from the earliest days of her 38-year career. She developed and honed this vision with deep focus, transcending many passing art trends. Her use of volcanic grit as well as paper clay have allowed her to transform the language of clay, making the light, airy sculptures for which she is known.

One feels nature in the work as well as science down to the cellular level.  One thinks of bone structure, hardness as though the form is fossilized bespeaking its fundamental qualities of an ancient existence. Structures and patterns also inform her work.  Åberg is a photographer whose images sometimes are reflected in her clay work.

Åberg’s sculptures “bring us to places within ourselves that we rarely explore.  The undefined, non-rational, the unknown. The silent space where we’re simply human, experiencing the vastness of existence.”  Louise Mazanti, art historian, writing on Åberg’s ”Skeleton of Existence” exhibition in Denmark. 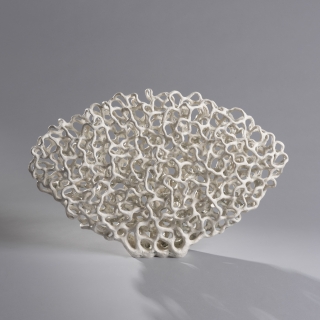 Barbro Åberg
Back To Top