Lacoste/Keane Gallery is pleased to announce its June exhibition: Beth Lo and Kyungmin Park: Sense of Place,  in which two ceramic artists of Asian heritage view the world through a childlike lens of their respective cultures.

Beth Lo was born in 1949 Indiana to Chinese immigrant parents.  She studied at the University of Montana with Rudy Autio, graduating in 1971. In 1984, when he retired, she assumed his role as professor of ceramics.

Lo exhibits internationally; in 2013 she was invited to participate Gyeonggi International Ceramics Biennale in Korea.  She received the $50,000 US Artists Hoi Fellowship in 2009 and the $20,000 NEA Visual Artist Fellowship Grant in 1994.  Her figurative sculpture and pottery have been acquired by the Schein Joseph Museum at Alfred University, the Hallmark Card Ceramic Collection and Microsoft Corporation among others.

Much of Lo’s artwork draws from themes of childhood and family.  She mixes Chinese and American references to reflect the culture into which she assimilated. While she references Chinese calligraphy and iconography, she also depicts someone like herself reading the New York Times. Her work stems from her life:  the birth of her son inspired her to comment on parenthood with recent work including references to stereotypical good children.  Her work continues to evolve using the visual language she has developed relating to children, the Chinese culture and that of the United States in both figurative and vessel work.

Kyungmin Park (b. 1985) was born in South Korea.  After studying ceramics in Korea, she received her BFA from the State College of Ceramics at Alfred University, Alfred NY in 2008 and her MFA from the Lamar Dodd School of Art at the University of Georgia in 2012.  Currently she is an assistant Professor of 3D studio art in Beverly.  Park was a long-term resident artist at the Archie Bray Foundation in Helena MT and was awarded a Windgate Fellowship.  Park has won multiple awards including Emerging Artist from NCECA the National Council on Education for Ceramic Arts in 2016.  She was an invited guest artist at the Jingdezhen International Studio in 2017 and was selected for the prestigious 74thScripps College Ceramic Annual Show in 2018.

In her sculpture, Kyungmin Park represents a childlike state of mind, free of the limitations of adulthood. Using abstractions of herself and other Korean females in her sculpture she captures the state of mind of the figure represented, as if carrying on a conversation with herself, a parent or playmate.  Park merges the darker emotions that dwell inside adults with the child’s imaginary world through her narrative storytelling. One sculpture stemming from a child’s untamed imagination contains a whole narrative.

Both artists have shown with us in group shows in 2018.  Lo in A Cultural Narrativeand Park in Through the Eyes of a Collector.

This exhibition is about different immigrant experiences, be it from a first generation American or recent arrivals.  Each of us bring diverse points of view to the American fabric, a nation of immigrants. For this, we feel that this show is timely and important. 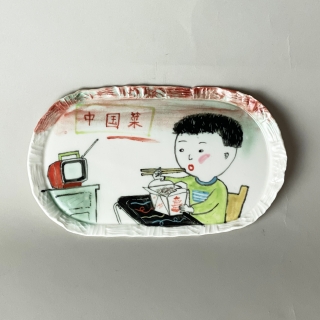 Beth Lo
Back To Top